Hitman: Blood Money is the fourth installment of the Hitman series. It was released on the PC, PlayStation 2, PlayStation 3, Xbox, and Xbox 360. The game takes place during and after the events ofHitman: Contracts. 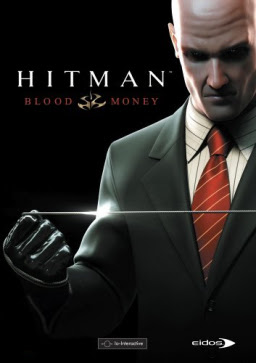 The gameplay of Hitman: Blood Money has improved since Hitman: Contracts. For instance:
The game begins with a notoriety rating of 0 on a scale of 100. When Agent 47 is being witnessed doing strange actions and being caught on CCTV, it will raise notoriety significantly. An NPC becomes a witness if they:
Notoriety can be lowered by bribery; the player has three choices, and the more expensive option has a higher output–cost ratio.
The player earns money for completing objectives, and optional tasks are available for additional funds. A rating bonus is also given at the end of a mission, and is proportional to the player's performance; the Silent Assassin rating procures the largest bonus of $150,000. Money can be used to bribe witnesses and customize weapons. Five weapons are customizable. Them being: Silverballer's, SP12 Shotgun, SMG Tactical, M4, and a W2000 Sniper rifle. If the player is playing any difficulty Normal or above, they will have to worry about Damage control, suit retrieval, and custom weapons retrieval, which lower your pay for completing the mission.

The game begins with a flashback to an abandoned Baltimore amusement park, where many people were killed in an accident caused by negligent maintenance of a Ferris wheel. The father of one of the victims calls the Agency and orders a hit on the park owner, Joseph Clarence, who was cleared of all charges. Agent 47 carries out the hit, and following that assignment, he receives a string of contracts from American clients eager to hire the legendary Hitman.
The bulk of the game takes place as flashback sequences that occur concordant to the present day, in which a journalist and the former CIA Director, "Jack" Alexander Leland Cayne, discuss 47's hits over the past year and a half (2004–2005) and his involvement in them. The reporter,Rick Henderson, arranged to interview Cayne concerning a recent attack on the White House, though it quickly becomes clear that Cayne's real intent is to discuss 47. Cayne lies about many details, such as stating that 47 stole cloning data from Ort-Meyer to sell to the highest bidder, or that during the Mardi Gras parade 47 was working with The Franchise to kill the Secretary of the Interior, (though it rather the opposite, 47 protected the Secretary and killed 3 members of The Franchise). As the story progresses, it is implied that the Agency's employees are being gradually assassinated by their counterpart, The Franchise. The situation degrades to the point where 47's controller, Diana Burnwood, informs him that they are the only ones left. At a certain point, Diana ends up closing down the Agency with a final contract to kill the assassins coming after them and splitting the remaining funds between them. After the assignment, 47 is approached by an old acquaintance, a CIA agent namedAgent Smith, who 47 had rescued earlier in the game. He offers 47 a high-profile mission, paid for using several million dollars worth of diamonds, to prevent an assassination on the president of the United States, Tom Stewart. The assassins are The Franchise's clone assassin,Mark Parchezzi III, and the Vice-President, Daniel Morris, both working for Alpha Zerox, the shadowy political organization which owns The Franchise and is dedicated to monopolizing the cloning technology that spawned 47. They intend to assassinate the President before the elections so he may not be re-elected and forward his pro-cloning stance, therefore disabling their ability to monopolize it; The Franchise and its controlling parent stand to lose their military edge.
47 successfully eliminates Morris and Parchezzi in the White House. A newspaper article at the end of the level shows that Parchezzi is believed to be Morris' assassin. Hunted by both enemy operatives and the police, 47 flees to his hideout. Without warning, he is visited by Diana, immediately arousing his suspicion. Diana proposes a plan to 47 to help them both escape danger from The Franchise. As 47 mulls over the briefing she hands him, expressing his misgivings as to the likelihood of its success, Diana injects him with what seems to be a poison syringe. 47's body is surrounded by SWAT members, and Diana, announcing that killing 47 was "surprisingly pleasant", is formally inducted into The Franchise by Alexander Leland Cayne, its founder.
The story at this point shifts to the present day; 47 is scheduled for cremation so his bone marrow cannot be harnessed by cloning rivals, forever destroying anyone else's chance of producing a non-defective clone. Diana drapes 47's custom Silverballer's over his chest during his hasty funeral and kisses him after applying lipstick. It becomes apparent that the "poison" she injected was actually the fake-death serum 47 had used in an earlier mission to get agent Smith out of a rehabilitation clinic. Diana's lipstick contains the antidote to the serum in it, implying she was actually 'killing' 47 for their survival. The funeral begins and the story then concludes in one of two different ways. In the first, it is presumed the antidote fails to work, and 47 descends into the crematorium. In the second, canonical ending, the antidote is successful and 47 awakens (by tapping the movement keys/using the left analog stick), slaughtering everyone in the church (excluding Diana, who had already left, taking the liberty of locking the gates to prevent 47's victims from escaping). 47 kills everyone, including Cayne, his bodyguards, Rick Henderson and the priest, thus leaving no witnesses and ultimately securing 47's identity from the public.
Sometime after the funeral bloodbath, Diana uses The Franchise's assets to reopen the International Contract Agency, which overlooks the Copenhagen harbor. She receives a call from a client referred to as "Your Majesty". The voice cannot be heard, but Diana replies that the Agency has lost track of 47. Meanwhile, 47 is seen at an establishment engaging in conversation with a traditionally-dressed Asian man. They discuss a service that can be found 'in the back'. The story ends on the curtain literally closing on the two.

These are the default equipped weapons carried by 47 automatically at the start of each mission:

These are the firearms automatically unlocked for 47 to choose from during the briefing before each mission (from A Vintage Year onward). They are provided by the Kruger Schmidt weapon-smith company and are all heavily customizable:

These are all the firearms and projectile weapons found throughout the game which can be procured by 47 during missions, unlocking them for selection alongside the custom arms for future completion of the game:

These are all the firearms and projectile weapons that can be found throughout the game, but for various reasons can not be carried over to other missions, or stored in the Hideout:

These are all the melee weapons otherwise found in different missions, though none of which can be carried over to other missions.

These are all the weapons that have been removed from being able to use or collect, but can still be accessed by accessing and changing the data files of the game.
Click here to download
Posted by Unknown at 08:48 No comments: